The Mueller Hearings will be held on Wednesday, July 24th on all of the major networks,

including ABC, FOX, CNN, CBS, NBC, PBS, MSNBC and CSPAN. Yes, it will be a huge PARTISAN hearing, more so than any we have ever witnessed. But remember, while it is partisan, one group is trying to get to the TRUTH and the other group is trying to cover for a corrupt and unfit President…for which at some point in the future will be shown to be the most corrupt politician our Nation has ever elected.

This will be an eye opening experience for many if America takes the time to watch. Of course if we tune it out, it could be left to Presidential historians to understand what Mueller said in the hearing and what the report says in it’s 448 pages of condemnation of Trump and his campaign. History is brutal when it comes to looking back at our mistakes, and this will be the mother of all mistakes. No one really knows what to expect, especially with Trump stating that Mueller should NOT testify and AG Barr is LIMITING his testimony…but I have a good guess as to what I expect later in this article.

To understand the credibility of Robert Mueller, one only has to look as far as his resume and the respect he has earned over the course of his entire PUBLIC SERVICE and his tenure as FBI Director which was longer than any other FBI director since policy was changed to 10 year terms. Mueller served 2 Presidents (Bush and Clinton) for a total 12 years when he was asked by Obama to stay on a little longer as FBI director. He garnered RESPECT and ADMIRATION from both sides of the aisle and his honesty and credibility unquestioned.

Let me give you a few details about Robert Mueller. He waited for an entire year for a knee surgery he had could heal so he could attend officer training school and then head to Vietnam. He volunteered for military service because one of his friends from Princeton was killed in Vietnam. Here are few more facts:

A couple more things to remember. Initially when Mueller was appointed as Special Counsel, he had 100% support of both Republicans and Democrats. He was praised as being fair and non-partisan, although he is a registered Republican.

President Trump speaks of a conflict of interest…there is NO SUCH THING, even his White House Counsel Don McGhan has told Trump there is no conflict. As for what Trump is referring to is a club fee that Mueller asked about a refund since he was no longer able to enjoy the facilities at Trump golf property. He was told that he would be placed on a list for refunds on a first come first served basis and was never sent the refund. AT NO TIME was Donald Trump ever involved in the issue and Mueller just assumed he would not get a refund. There were no arguments, no litigation…nothing. Also, Trump states that Mueller was conflicted because he was offered the FBI Director job, which is another Trump LIE. There is no conflict. And as for Mueller and Comey being best friends… not true. They are political and governmental acquaintances, not unlike Trump is to Pence!

WHAT TO EXPECT AT THE HEARINGS
OK…so this is how this is gonna go down at the hearing (just a guess and my opinion).

The hearing will start off with the traditional partisan opening statements by Nadler and Collins. Nadler will try to stick to the facts of the Mueller Report during his statement and Collins will divert and try to discredit the hearing with references to a witch hunt. Then Mueller will read his brief statement and his desire to stay within the confines of the report itself.

My guess is that the Democrats, provided they follow their strategy will ask fairly direct questions and do as little grandstanding as possible (which is the norm in all hearings). I think their questions will not only be short and to the point, but many will require either a yes or no answer, and some will just confirm the statements within the report itself. More than likely, the Democratic panel members will have assigned areas to ask questions so as not to repeat the same questions over and over, and possibly every other Democratic panel member may offer follow-up questions. Basically I think the Dems will be coordinated in their topics and their questioning with very little grandstanding.

I’m assuming the Republicans (most not all) will NOT ask any questions about the report itself and instead focus on the origins of investigation (right wing conspiracy theories) and special emphasis on Peter Strzok and Lisa Page as well as trying to discredit McCabe and Comey. They will use this diversion to confuse and conflate the actual facts of conspiracy and obstruction by Trump. My hope is that Nadler keeps close reigns on ALL of the questioners to keep it focused.

The biggest and most obvious Republicans to watch are wackos Louie Gohmert, Jim Jordan and Matt Gaetz, and their attempts to disrupt, divert, and spew conspiracy theories about a “deep state” (which does not exist). All three of these guys have their own “personal issues”, some of which are pretty well known…Google them and you’ll see.

In other words, in light of the possibility of the COUNTRY being cyber-attacked and our elections being meddled with…the Republicans are more concerned about HOW an investigation was started and who was biased in the investigation than they were in the actual FACTS of the INVESTIGATION. And let me just state that as humans…we are ALL BIASED politically. That does NOT stop a person from conducting an investigation without bias. Trump is biased against ANYONE who differs from his views…BIASES exist, but they shouldn’t have an influence on facts. Simple as that!

I don’t know what the conclusion will be AFTER the hearing. Probably only a few minds will be changed with the facts because most people’s views are already made up and no amount of facts or counter facts will change their mind…including mine. No, I don’t think there will be any new information divulged (not that there might not be new information)…especially since AG Barr has AGAIN interfered with the process and instructed Mueller that anything not covered in the report is considered privileged information by the Trump administration. So the bottom line is this… most people won’t want to read a 448 page report, but they MIGHT listen to the author of the report confirm and validate his work and maybe that will change their mind. Hopefully common sensed people with the ability to THINK for themselves can come to a practical conclusion on their own and avoid the gaslighting by Trump or his sycophants.

But I know what I know. I know that Donald Trump has been a con, a fraud, a misogynist 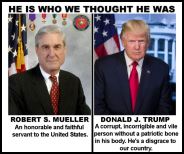 all his life. What I didn’t know was how selfish he was to himself over his country, willing to throw ANYONE under the bus to save himself. Nothing is more important to him except money, power and manipulation. He is a bigot, he is a RACIST (yes there is a difference), he is a sexual assaulter (his own words), he has obstructed justice on multiple occasions and yes, he has betrayed both the American people and his country. He is the lowest of lows and the most vile person I know. History will regard him as the worst President in our 243 year history.

So regardless of what happens tomorrow…remember the final conclusion on volume II by Robert Mueller states, “If we had confidence after a thorough investigation of the facts that the President clearly DID NOT commit obstruction of justice, we would so state. Based on the facts and the applicable legal standards, we are unable to reach that judgment.”

He did NOT exonerate Trump. If he could have, he would have. The ONLY reason Trump was not indicted is because he is a sitting President and current DOJ policy (not law) is to not indict a sitting President. If Trump were an ordinary citizen, he would be spending years in prison, which he still might after he is voted out of office.  Make no mistake…Donald J. Trump is a criminal on numerous levels in our justice system, and yet his obstruction of justice and hiding of the facts continues daily by himself and the DOJ that Trump always wanted. He’s got his Roy Cohn.